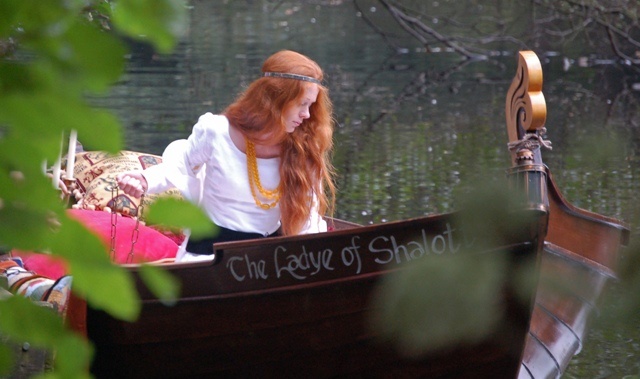 John William Waterhouse provided the visual inspiration for the clothes worn by The Lady of Shalott in our dramatisation. In 1888 he painted his first version:

If possible, I also wanted our actress to resemble the model Waterhouse used and we had the great good fortune of finding Victoria Rigby, an actress who bears a remarkable resemblance, to play The Lady.

Now we just had to create the clothes.

There was no real departure from my usual approach to making costumes – attention to detail, thorough research and being faithful to the period  –  though this time we were working on a mythological world. I wanted the work to have the same authenticity as any real period of history. The Pre-Raphaelite artists and their followers drew their inspiration from a wide swathe of history – from Anglo-Saxon through to the Renaissance. I wanted to look at this world through their Victorian eyes, and treated their paintings as my primary source. The dresses I made for the Lady of Shalott would be true to the paintings and would reflect the cut and construction of both medieval and Victorian clothes.

Above: Pauline Loven working on the toile for the gowns.

The white dress, ‘The Lady of Shalott’:

Lying, robed in snowy white That loosely flew to left and right –

The dress comprised a white linen medieval kirtle made up of a ten shaped of panels similar to the medieval Greenland dress (from ‘Woven into the Earth Textile finds in Norse Greenland’), though shaped much closer to the figure, with wrist length fitted sleeves. This was covered by a second layer of white cotton lawn (a good 19th century textile) which formed the long tapering medieval sleeve and was gathered thickly into the dropped waistline to give the fullness of fabric revealed in the painting.

The dress also had a yellow-gold checker design around the upper arm. As no textile trim could be found that looked anything like this, a friend , Avril Sanderson, volunteered to embroider it for us. This embroidery was carried on a third short sleeve.

Above: Avril Sanderson working on the embroidery for the sleeves.

The gown was laced down the back in Victorian cross-lace fashion rather than a medieval straight-lace style. The underwear worn was a Victorian full length petticoat and drawers. Our actress didn’t wear a corset, as befits the soft line of the painting, the rational dress movement and the aesthetic movement of the Victorian period.

I made the black curving hip belt from black cotton velveteen, and the necklace of amber beads was strung specially from beads I collected.

The Coral dress: ‘I am half sick of shadows’:

When Waterhouse painted ‘I am half sick of shadows’ in 1894 he used a different, dark-haired model.

This immediately posed a problem for me as the colour of the clothes in this second painting would not suit our beautiful red-haired actress. I needed to tweak the tones away from amber and more towards coral. 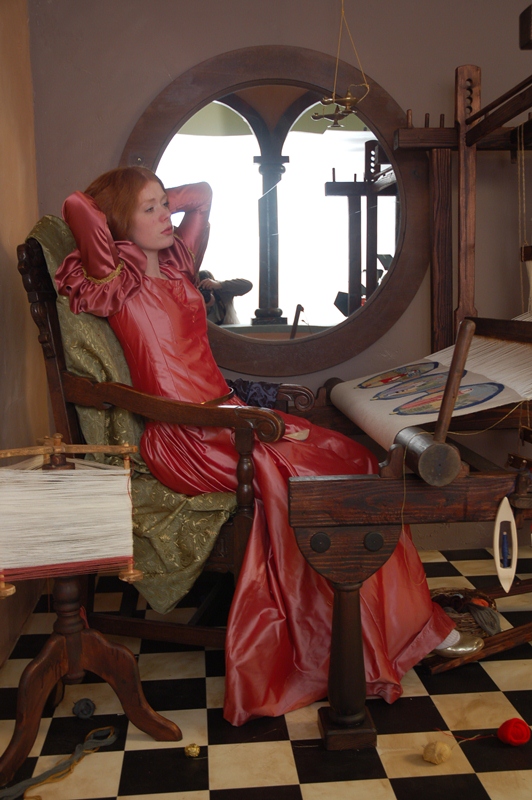 Finding the best colours took a long time, but in the end I chose a dusky pink silk satin for the sleeves and a coral pink silk taffeta for the body of the dress.

The cut of the dress was the same medieval one as the white gown but without the second layer. The sleeves were based on a typical 1890’s sleeve. As before, the gown cross-laced down the back.

We also paid homage to William Holman Hunt’s painting of the ‘Lady of Shalott’ in the way that hair hair flies up in the moment when the curse comes upon her.

Above: William Holman Hunt’s engraving of the Lady of Shalott from the 1857 Moxon edition of Tennyson’s works.

The mirror crack’d from side to side; “The curse is come upon me,” cried The Lady of Shalott.

Victoria Rigby as the Lady of Shalott and Ben Poole as Tennyson (29 seconds).