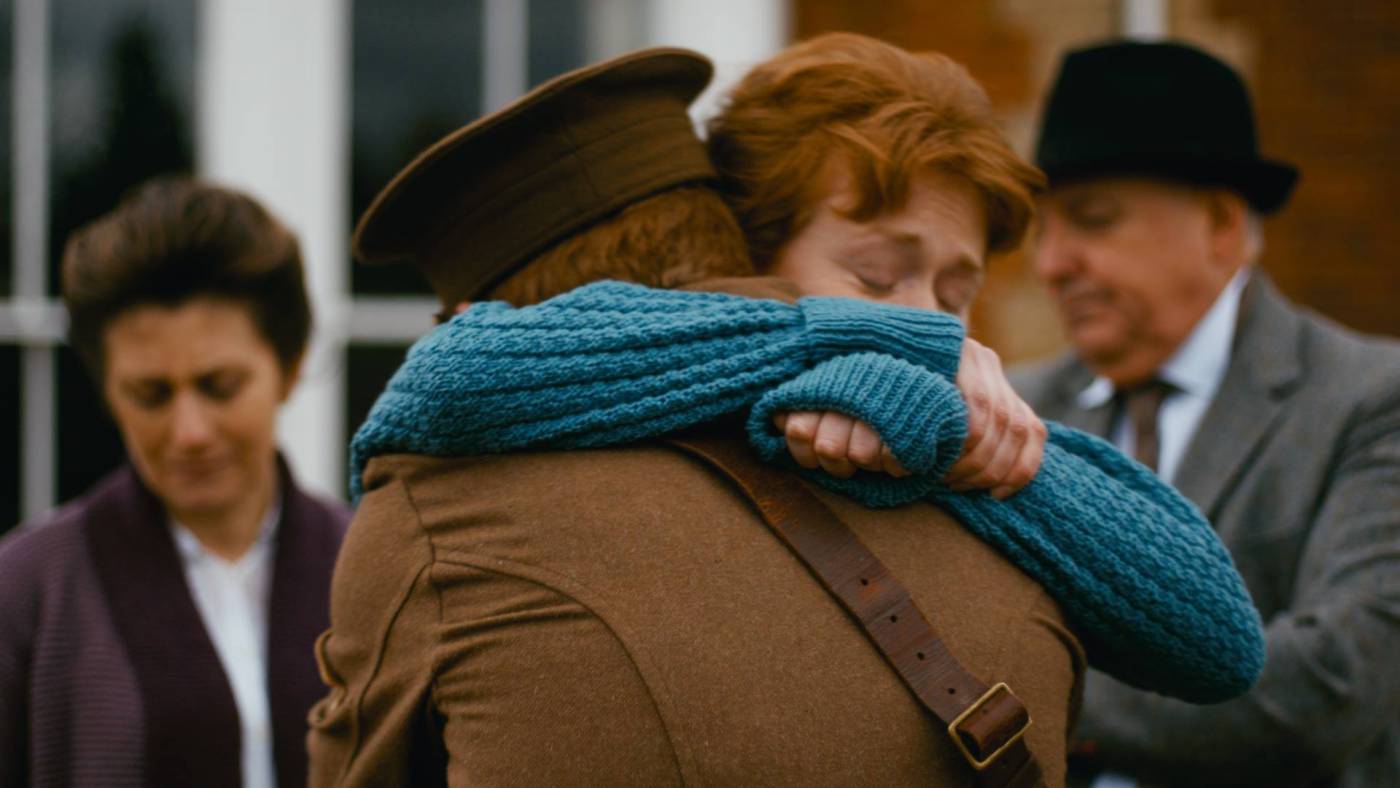 Even before the script was written for ‘Tell them of Us’, I spent a year researching and gathering vintage resources to begin creating the costume. The film was to be set in the Lincolnshire village of Thimbleby during WW1. As I worked I became aware of just how much clothing was hand knitted during the period and realised that to only include sewn clothing would have been a distortion…

Knitting clothing is more easily within the reach of lower income families than sewing clothing and we were telling the story of a small Lincolnshire village including many classes of people. Fabric had to be purchased by the yard, usually requiring three of four yards at a time. Wool can be bought by the ball, or spun from fleece, and the cost can be spread. Knitting doesn’t require expensive machinery either, just a few pairs of needles. It can also be done almost anywhere, and at any time. An experienced knitter doesn’t need much light either (most of the time). For more on how I found my army of knitters see Centenary Stitches.

During the war, knitting became a vital part of the home-front war effort, with millions of pairs of socks being knitted by women and children and sent to the front line via the Red Cross. Balaclavas, hats, mufflers, mitts, gloves, chest warmers, cholera belts (a knitted band to comfort the abdomen) and even bandages were knitted and sent to the front as well.

Knitted clothing also shows the changing fashions of the time, something I was keen to reflect, with a distinct move from shawls to cardigans, waistcoats and jumpers. Driven by the need to become active members of society, women had begun to abandon the wearing of corsets. This trend was accelerated by a scarcity of corsetry due to shortage of metal for their spiral wires and steel busks. However, corsets kept the body core insulated and warm, needing only a shawl to cover the shoulders to keep the chill off. Once corsets are no longer worn, cardigans, waistcoats and jumpers become vital for warmth. They are also liberating; shawls restrict the movement of the arms as they are needed to keep the shawl in place, sweaters now permit the playing of sports as well as active involvement in the workplace and factory.

So many times people have said of the wonderful clothes created for ‘Tell Them of Us’, ‘I would wear that’. Women’s clothing in this period becomes recognisably modern. It is part of the story I wanted to tell, so a huge thank you to the amazing team of knitters, Centenary Stitches, who helped create such a believable and accurate wardrobe for the film. A book has now been produced based on a modernisation of the vintage knitting and crochet patterns which is now available from Northern Lace Press. The film ‘Tell Them of Us’ is now available on DVD from WAG Screen Shop.