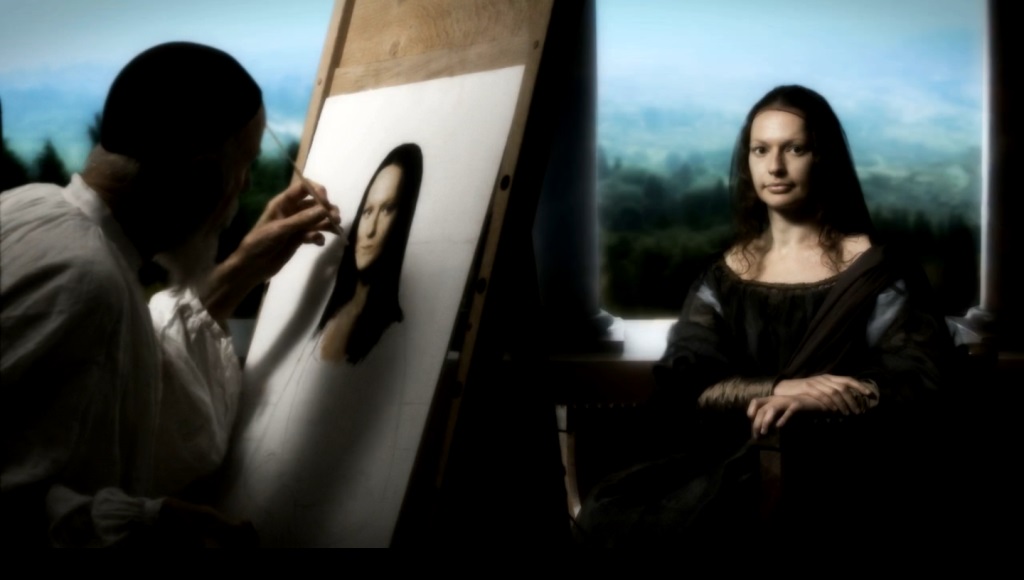 Leonardo da Vinci’s portrait of Mona Lisa, thought to beLisa Gherardini, the wife of Francesco del Giocondo, a wealthy Florentine silk merchant, is magnificently enigmatic. Even her clothing veils her in mystery. In order to recreate her clothes I had to peel back the layers as the swathes of dark silk mask the details of her dress giving only hints of the garments that lie beneath. 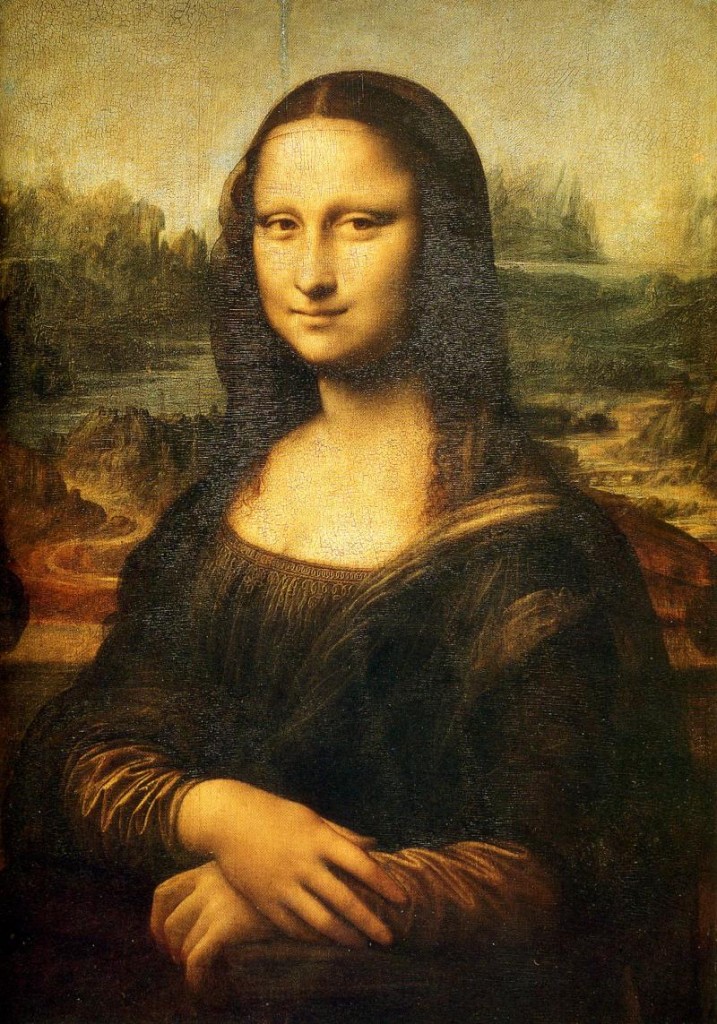 Leonardo da Vinci’s portrait of Lisa Gherardini, the wife of Francesco del Giocondo, a wealthy Florentine silk merchant, is magnificently enigmatic. Even her clothing veils her in mystery. In order to recreate her clothes I had to peel back the layers as the swathes of dark silk mask the details of her dress giving only hints of the garments that lie beneath. The painting has also aged and darkened over time obscuring yet more detail. All of this adds to the mystery and allure of the woman with the enigmatic smile, Mona Lisa, but presents a challenge to period costumier wishing to replicate her garb. I began the process by studying the Mona Lisa portrait (Leonardo da Vinci, Musee de Louvre, Paris, left) and made a number of observations. · Lisa is wearing a garment of sheer dark silk which is gathered at the neck and has loose sleeves rolled back at the elbow. It is trimmed at the neck with gold braid or embroidery. · She is clearly wearing a structured garment underneath which is supporting her bosom, but there is no indication of what this might be. · At her left shoulder, beneath further silk draping, a strip of white gathered fabric can be seen. · The under-sleeves are a different colour to the rest of the garment and are tied to an unseen garment at the shoulder. · She is wearing the finest black silk veil, but to the back of her head a line can be just made out which suggests a means of stopping the veil slipping back. Her hair is otherwise loose. Next I studied as many of Leonardo da Vinci’s paintings and drawings I could find. This study confirmed my assumption that the sleeves were separate and tied at the shoulder revealing a puff of white linen from the chemise beneath, and gave some indication of what her underlying dress might be. I then looked for an explanation of Lisa’s loose outer-garment. This style of dress is similar to the gowns depicted in paintings of the Virgin Mary and is the standard form of dress worn by angels in contemporary paintings. It seems to be a garment called the guarnello: an over-garment worn by children, and sometimes pregnant women, and usually made from linen – though in the case of Mona Lisa, made of silk. A portrait by Sandro Botticelli shows such a garment worn by a pregnant woman. Leonardo began his portrait of Mona Lisa in 1503. It is thought that the painting was commissioned by her husband Franceso to celebrate the safe arrival of their third child, Andrea, born the previous December. If this is the case, then would help to explain the general Madonna/maternal look of Lisa’s dress. Perhaps too, that fact that Francesco was a silk merchant explains the use of so much fabulously sheer silk in her dress, veiling and about her shoulders, both as a statement of wealth and as a promotion of his business. There is a copy of the Mona Lisa, known as Gioconda, in the Prado Museum in Madrid, of which little seems to be known. Assuming that this copy was painted before Leonardo’s masterpiece had darkened, then, with its paler silks and stronger colours, the painting may offer some insight into Lisa’s dress. However the colours are quite different so one has to take care in using it as a guide. I then began looking at the portraits of Italian noble women painted by Leonardo’s contemporaries and found paintings by Raphael, Titian and even Durer to guide me in the recreation of the unseen portions of Mona Lisa’s dress. One painting was especially useful in suggesting the style of the gown Lisa could be wearing beneath the guarnello, the sort of garment to which the silk sleeves would have been tied: Raphael’s The Lady with the Unicorn. The Raphael painting, which is held by the Galleria Borghese in Rome, bears a strong similarity to Leonardo’s Mona Lisa in terms of composition. It is a portrait of an Italian noble woman painted between 1505 and 1506 and so offers an example of dress of the right period and geographical region to serve as model for Mona Lisa’s. However, I didn’t copy this gown exactly, but used a number of painting references combined together to create an original garment in a style which was likely to have been worn.

I made the gown from black silk damask, as that would not show through the very dark grey, sheer silk of the guarnello. I edged it with bands of black velvet like the Raphael, but made it front-fastening as this was practical for a woman so recently pregnant. The stiffened and lightly boned bodice was lined with linen and the fastening consisted of concealed rings through which a single black silk ribbon was drawn. The trained skirt was pleated at the front and cartridge pleated to the bodice at the back. Titian’s painting The Woman with the Mirror, Musée du Louvre, Paris, indicated the style of chemise worn; very full with an open, gathered neckline and raglan cut sleeves. I tested the white linen I had planned to use to see how it bulked up at the top of the sleeve and decided to make the chemise much less full that of the Titian portraits or the puff would be too bulky. This may suggest that the linen I was using was simply not delicate enough or it may reflect genuinely the cut of Mona Lisa chemise, I am not sure which. I also copied the use of the soft silk sash worn in the Titian painting creating a sash to draw in the gathers and folds of the sheer silk guarnello to give Mona Lisa’s gown the controlled form of the painting. Mona Lisa’s silk veil proved quite a problem as I was unable to find a black silk of the same delicacy and transparency. In the end, and in spite of hand-hemming a number of different silks, we had to use a modern man-made textile. I also had to consider what I could see to the back of Mona Lisa’s head. I felt it was likely to be some sort of cap or coif which would have allowed the veil to stay in place. Here I drew my inspiration from many sources, but especially Durer’s 1505 painting of A Venetian woman (interestingly, Durer, a German painter and engraver, made the portrait when he was in Italy fighting a copyright case, as some of his woodcuts had been plagiarized by the Italian artist Marcantonio Raimondi) and the newly re-discovered painting by Leonardo, A Young Woman in Profile (late 15th century). I created a gold, wired cap or coif to sit neatly at the back of Mona Lisa’s head, but we left Mona Lisa’s hair loose as it appears in the painting. The cap did indeed help hold the veil in place.

The photographs above were taken during the dress rehearsal when we tested the costume, make-up and lights. Small alterations were made to the dress including replacing the veil and swapping the sash for one of black silk. A black black silk damask gown is worn beneath the black silk guarnello. Silk sleeves are attached by ties at the shoulder revealing just a small amount of the chemise sleeve. The recreation of Mona Lisa was for one of our painting/technology inspired video sketches. This summary of the research behind the project was first published on my Period Wardrobe Blog on 17th December 2009. Since then I have returned to the subject and I will write up those results soon. Bibliography: Leonardo da Vinci, Gabriel Seailles, Grange Books 2006 Renaissance Dress in Italy 1400-1500, Jaqueline Herald, Bell and Hyman Ltd 1981 Raphael, Christof Thoenes, Taschen 2005 Italian Paintings and Drawings, Royal Collection Publications 2007 Mona Lisa Revealed, The True Identity of Leonardo’s Model, Giuseppe Pallanti, Thames and Hudson 2006 Article: Guardian, New Leonardo da Vinci painting ‘discovered’, Helen Pidd, Tuesday 13 October 2009