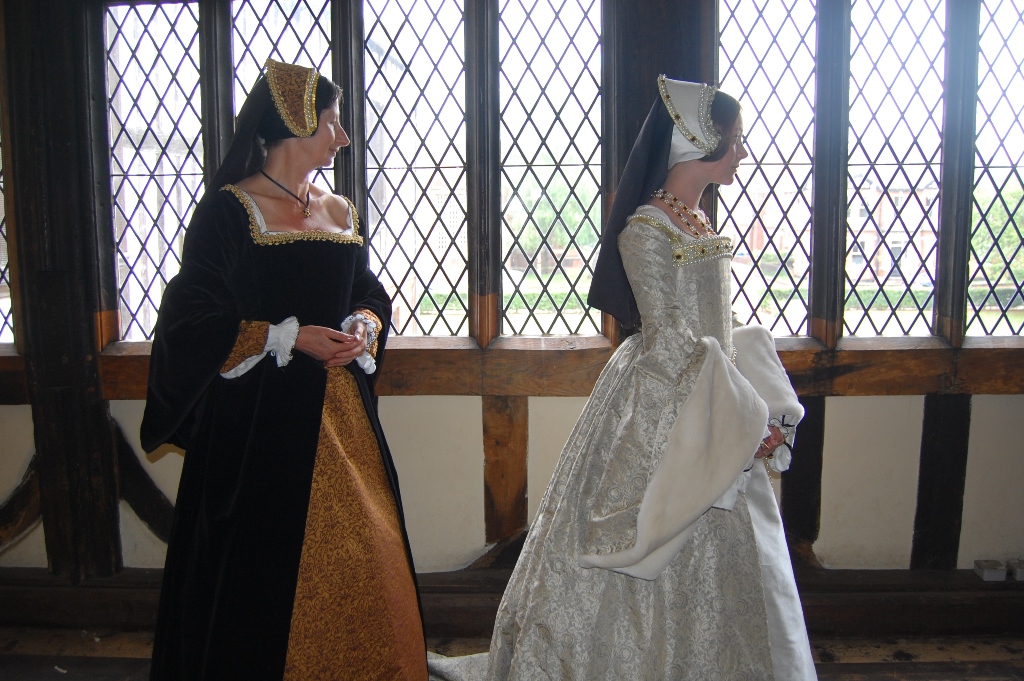 In 2009 I was asked to re-create a Tudor gown fit for Queen Catherine Howard, fifth wife of Henry VIII, for display at Gainsborough Old Hall to commemorate Henry and Catherine’s visit made as part of Henry’s Northern Progress in 1541.

The gown I made for her consisted of a French gown in silver silk damask, with a French hood, kirtle and foresleeves of cloth of silver. They are decorated with pearls and black diamond ouches. Although the costume was to be on permanent display on a static model, I was keen that it could also be taken off the stand and worn and so all the layers, including chemise, stays, petticoat and even the linen under-cap, were created as well. Catherine Howard was by reputation petite and possibly under five foot in height, so I made the gown to reflect that.

Her apparel was recreated from a number of contemporary sources, including portrait and documentary, but principally the following:

· A miniature portrait thought to be of Queen Catherine Howard by Hans Holbein the Younger. The sitter is wearing jewels similar to those worn by both Jane Seymour and later Katherine Parr, and the neckline of her gown is decorated with an unusually wide band of pearls and jewels.

· In 1541, when King Henry and Queen Catherine visited Lincoln the Queen is described as wearing cloth of silver:

‘The King and Queen came riding into their tent, which was pitched at the furthest end of the liberty of Lincoln and there shifted their apparrel from green and crimson velvet respectively to cloth of gold and silver.  Behind that tent was one for the ladies, and some distance off, a “hayle” where the six children of honour dressed in cloth of gold and crimson velvet and the horses of estate were prepared’.*

In spring 2010, my community filmmaking group WAG Screen was asked to make a film for Gainsborough Old Hall. As this is a building of many dates and with multiple histories – many of which have a national dimension, it required an individual approach. It was to meet this challenge that the director of WAG Screen films and Crow’s Eye Productions, Nic Loven, came up with the device of having a visitor to the Hall with the gift of seeing the past.

Amongst the many histories we wanted to include was that of Queen Catherine Howard. However, finding an actress to fit that petite-sized gown was going to be a challenge. We opened up auditions at Gainsborough Old Hall for an afternoon in order to find some extras and in walked a petite red-haired girl, Bryony Roberts, who had power-walked from school at the end of the day to try and catch us. Bryony was ideal for the role and we couldn’t believe our luck. The gown was also an almost perfect fit, the only problem being the shift which was a bit small across the shoulders, so we couldn’t tuck it away under the gown completely. We also had to drop the hem by two inches. We have now filmed the scenes with Bryony and her Lady in Waiting, played by Su Toogood, and they look superb.

* I am indebted to my friend Claire Malyon who did the following research in the British Library for me :

‘On the King’s entry into Lincoln on Tuesday the 9th Day of August’
” When it was known that the king was to come to Temple Brewer 7 miles off, to dinner, the mayor, burgesses and commoners prepared themselves towards the height as also did the gentlemen and yeomen of Lynsey, near to the King’s tents, the gentlemen and their servants on one side on horseback, and the mayor and citizens on foot. The archdeacon, dean and clergy rode a mile beyond the city liberties to the King’s tent and there made a proposition in Latin, presented a gift of victuals and then passed the nearest way to the Minister.  The King and Queen came riding into their tent, which was pitched at the furthest end of the liberty of Lincoln and there shifted their apparrel from green and crimson velvet respectively to cloth of gold and silver.  Behind that tent was one for the ladies, and some distance off, a “hayle” where the six children of honour dressed in cloth of gold and crimson velvet and the horses of estate were prepared.
On Friday the King and Queen departed for Gainsborough in like order that they arrived save that the mayor, henchmen and horses of estate were not there and the earl of Derby bare the sword.”

12th August, 1541.  French Ambassador Marillac writes to Francis I.
‘The King’s fashion of proceeding in this progress is, wherever there are deer numerous, to enclose two to three hundred and then send in many greyhounds to kill them, that he may share them among the gentlemen of the country and of his court.  When he passes any town in which he as not been during his reign, without any other solemnity other than having the streets decorated and the inhabitants going before him on their little geldings in their ordinary clothes, he himself (mounted on a great horse with all the notable lords of England in front two and two, and sixty to eighty archers with drawn bows behind) goes, with the Queen, Lady Mary his daughter and some other ladies to the lodging prepared for them.’

The Privy Council sat at Gainsborough on the 13th, 14th, 15th, and 16th of August.   Present were the Dukes of Norfolk and Suffolk, the Great Chamberlain, the Great Admiral, the Treasurer and the Comptroller of the Household, Lord Durham, the Master of Horse, the Vice-Chamberlain, Lord Wrothesley and the Chancellor of Augmentations.

In addition to various academic references and portraiture I consulted the following books in the making of these dresses:

Patterns of Fashion by Janet Arnold, Period Costumes for Stage and Screen 1500-1800 by Jean Hunnisett and The Tudor Tailor by Jane Malcolm-Davies and Ninya Mikhaila

A photograph of my gown has been included in a new book about the ill-fated Queen. 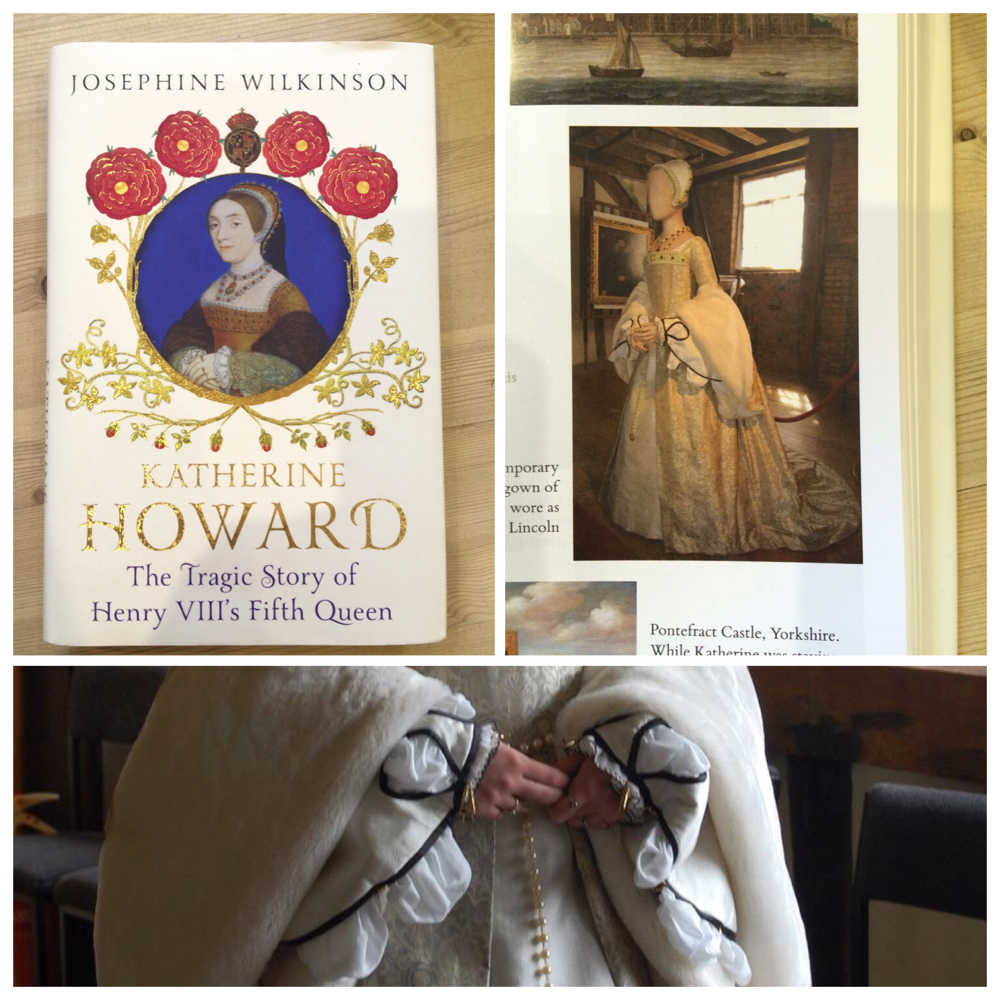